While this game was released well over a decade ago, the marks of its age are not too extreme. The graphics have a bloomy overall appearance but are serviceable enough. Gameplay still feels fresh and challenging, much more so than later sequels. There are some issues with the game's technical features, including a low resolution and launching with new operating systems. Warrior Within is a classic of the series, a more serious and ominous entry which provided a much needed expansion on the universe. While it is certainly a dated game, it holds up well and should be seen as a must play for fans of the franchise.

Hunted by Dahaka, an immortal incarnation of Fate seeking divine retribution, the Prince embarks upon a path of both carnage and mystery to defy his preordained death. His journey leads to the infernal core of a cursed island stronghold harboring mankinds greatest fears. Only through grim resolve, bitter defiance and the mastery of deadly new combat arts can the Prince rise to a new level of warriorship and emerge from this ultimate trial with his life.

Interesting game, the fight everything perfect. Nice game for me, it good and i always stay with it any moment. What do you think about Prince of Persia: Warrior Within? Do you recommend it?


Dated classic Prince of Persia: Grand Theft Auto: Some of the people on the team can use both hands simultaneously all over the keyboard, but that's personally my limit and that's what we had on Prince 2, so we're trying to stick to that. It's a trick to keep people from getting disoriented. 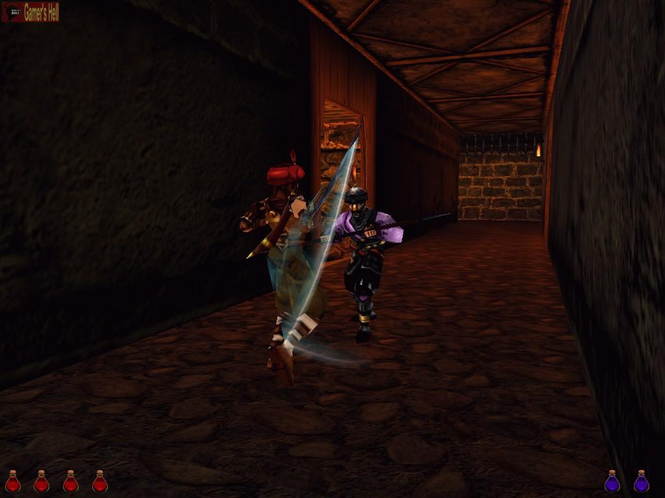 I'm sort of a check on them, because many on the team are very good core gamers and they play games like Tomb Raider and Final Fantasy all the way through. They don't seem to have any trouble with menu bars, but I'm hopeless with them. The first two POP games had a massive following, but that was then and this is now. So who is this game going to appeal to? I also hope that year-olds and year-olds will be able to enjoy this one, too. As well as that, I hope my wife will play it, because she never played Prince of Persia 1". We've seen the game moving with our own eyes, and it seems to be an explore 'em up with swords.

So is the emphasis on action, or adventure?


The Prince doesn't have a gun; he doesn't blow out everybody in the room. There's a lot of thinking-type puzzles, but at the same time there's also a lot of action. I mean, the basic idea behind Prince I was to take the first eight minutes of Indiana Jones and make a game out of it, and that's pretty much the mix that we're still trying to do.

Latter-day gamers are accustomed to wielding an arsenal of weaponry that would shame even the most avid rifle-polishing Guns 'n'Ammo subscriber. Prince Of Persia 3D is lacking in the heavy firearms department, favouring a flashing blade rather than a smoking barrel, but Jordan doesn't foresee any problems: And the Prince does have one long-range weapon - it's a bow and arrow with which he can shoot spells and things. Indeed he does, and some of the spells are particularly devious. For instance, piercing a guard with an Arrow of Discord forces him to launch a violent attack on his colleague, thus enabling you to sneak past.

On the subject of ugly wanton violence, Jordan says: But of course, with respect to the seven-year-old contingent, we've tried to make it more suggestive than gory. That is, you should feel really awful, but it shouldn't be something that would make you turn off the game and never turn it on again. Has this trademark demise made it into the 3D version? There's just a few things that were sort of signature things for the first games: And even though they may be 15 per cent of the game now, as opposed to 95 per cent of the first game, you've still got to have them in there as touchstones" Prince Of Persia 3D involves an inordinate amount of fighting, begging the question of when Jordan's last fight was.

I think some kid was teasing me and I decked him, then we got into a fight. To tell you the truth, I don't think I thought about it until you asked me just now. As the scale of the recent E3 show demonstrates, the industry has clearly moved on a little since the first Prince Of Persia game, as Jordan concurs: One big difference is that the first Prince Of Persia was just me at a desk with a computer.